All About Work Gear 🛠️ 🥾

In the boots industry, the name Red Wing is synonymous with quality. The boot makers have been plying their trade for over 110 years, equipping their customers for everything from cement laying to rock climbing. And Irish Setter, a subsidiary of the company since 1950, is the Jewel in Red Wing’s crown.

The name was originally inspired by their red russet leather. Almost a century later, Irish Setter has ventured beyond producing simple, reliable footwear to manufacturing top of the line boots, packed with state of the art features. But how do they stack up?

We’ve taken a look at their Work, Leisure, and Hunting boots and see if they really live up to the hype.

Irish Setter’s work boots provide its biggest range of footwear. Regardless of your job or working environment, they almost certainly make a pair of boots to match.

The range of technology in their work boots is extensive. Most come with a composite shank, making them durable while keeping the weight low. Their patented UltraDry construction combines a sophisticated lining with full-grain waterproof leather uppers to ensure your feet stay dry. Some come with heat-resistant soles, capable of withstanding temperatures of up to 475º Fahrenheit. Most are equipped with puncture-resistant insoles.

Safety toes made from a number of different materials give you the option of protecting your feet while also choosing a boot that meets ATSM standards in electrical hazard protection. And if you prefer a comfier, low-weight option, Irish Setter also offers over 20 styles of work boot with a soft toe.

You can see more designs of boots here.

Where are Irish Setter boots made?

Today, most Irish Setter boots are manufactured in China, though many of their work boots still use American-made Tanning leather, which is worth bearing in mind if you wish to support the traditional boot-making industries.

For most people, the biggest obstacle to purchasing a pair of Irish Setters will be the cost. But their work boots are highly rated for a reason. In the context of everything that they offer, the price you pay is usually fair.

Generally speaking, Irish Setter boots don’t run big, but they advise that you try a pair in-store before purchasing if you can. Most pairs come with a choice of widths, and it’s essential to pick one that’s the right fit, especially if you intend to wear it for the duration of a shift, five days a week.

In contrast to its range of work boots, Irish Setter’s line of ‘lifestyle footwear’ offers the least variety. That said, its selection of casual boots and shoes is still fairly diverse.

Its Drifter boots are ideal for hiking, with their high rebound EVA midsoles and slip-resistant outsoles trademarked Armatec protective coverings and Scentban technology.

If you prefer something more suited to the bar, then look no further than the Travelers, available in both Chukka and Oxford styles, and in a range of materials. Whether you opt for the high walls of the Chukkas or the low cut of the Oxfords, these boots are incredibly stylish while still incorporating the ruggedness you would expect from any member of the Red Wing family.

Irish Setter says their aim was to create something that had the look of a traditional boot while being as comfy to wear as a sneaker. We think they’ve succeeded. 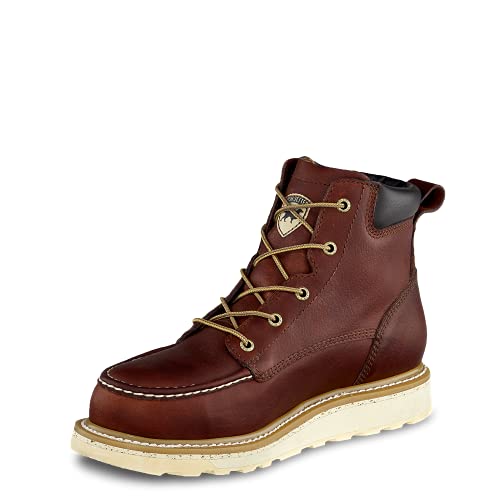 Ever bought a pair of boots only to be left disappointed by their inability to protect you from thorns, claws or snake fangs? Well thanks to Irish Setter’s 17-Inch Camo Snake Boots, such concerns can be a thing of the past. The use of non-woven material, combined with either leather or nylon, is said to make their patented SnakeGuard construction impervious to bites.

Red Wing have been making hunting boots for generations, and their experience is evident in each boot in the Irish Setter Hunting range.

In the end, we were very impressed by most of the Irish Setters that we tested. It’s a brand worthy of its reputation.

How Should Work Boots Fit – Like This Work boots are an essential piece of kit on a construction site and could mean the difference between a stubbed toe and a missing toe! But all...

Working on farms is a tough job and you need to trek through many types of terrains every day. Without the right boots, you could find your feet damaged and even water coming into the...

Bates Military Boots – Why these Tactical Boots Are a Good Choice

Bates Boots for Police and Tactical Work   Bates military boots are ideal for strenuous outdoor use and are available with a range of desirable features. Sometimes referred to as tactical boots, let’s take a...

What are Shanks and Why do We Need Them in our Work Boots?

Ever wondered what the thin strip of material running along the arch of your work boots is? In this article, we will talk find our what these are and why we need them!

View all our articles